You are here: Home / Uncategorized / Stronghold Motorsports Overcomes the Challenge of the Mint 400 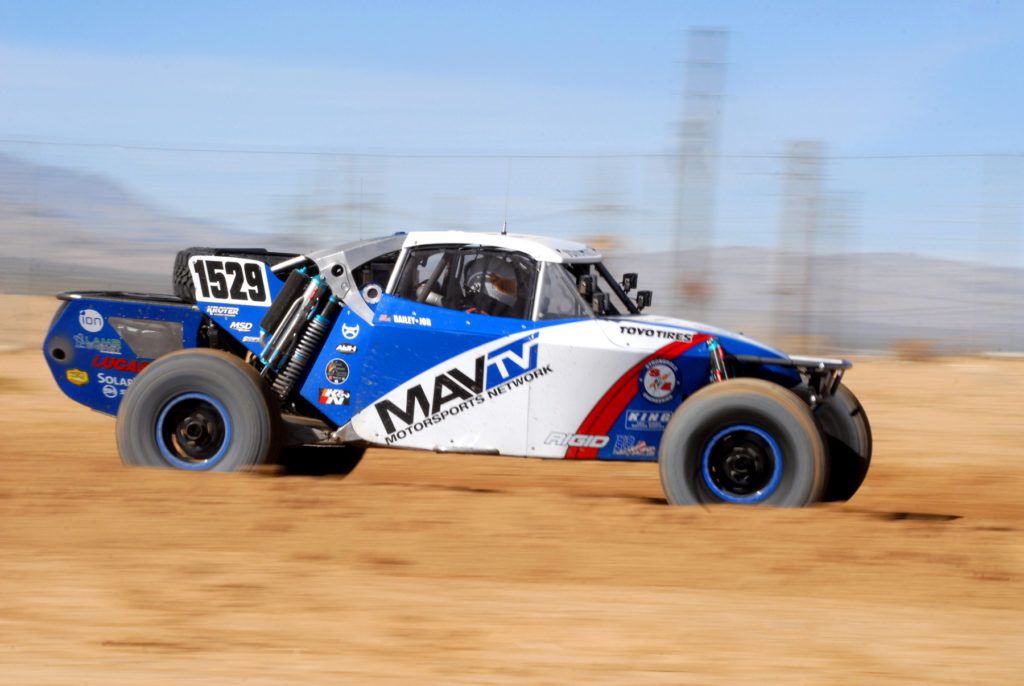 It’s Tuesday night, the team has just gotten back from testing and it’s time to load everything back up and head to Vegas for one the toughest races of the year; The Mint 400. Known for its 400 miles of rugged terrain through the desert, it’s been labeled as one of the hardest races to finish. With 74 unlimited vehicles starting, and the MavTV Stronghold Motorsports class 1500 starting 35th and ranked 13th in class, we had our work cut out for us. Knowing that inevitably the elements would get the best of some racers, Larry Job started out with the strategy of strong and steady for the first lap; avoiding any flats with our Toyo sponsored tires, he was able to pick up 6 spots in class and 4 overall. After picking up the pace on the second lap, Larry handed over the car to Brandon Bailey 3rd in class and 19th overall. Brandon’s 3rd and final lap would present some challenges. From being driven into the night hours, having oil level concerns, losing voltage and ultimately losing radio communication with the pits; he was unaware of his position on the course. Unknowingly to Brandon, amidst all these complications he had pulled into second place. Continuing to charge hard, MavTV Stronghold Motorsports ultimately ended up finishing 3rd in class 1500 and 17th overall; just 14 seconds behind 2nd place. It’s amazing that after 6 ½ hours of racing, a simple 14 seconds separates finishing times.

The car performed great, other than the radio issues. MavTV Stronghold Motorsports finished with zero flats on the course, which is a feat many cannot claim. With two races completed for the 2016 season, we are currently in 3rd place in points. With just 6 points separating us from first place, it promises to be an exciting season. Next race on schedule is the Laughlin Desert Classic in May, where we plan to take over first in class.

As drivers make the climb to reach the premier classes of the Lucas Oil... END_OF_DOCUMENT_TOKEN_TO_BE_REPLACED

Due to the recent school closures caused by COVID-19, many children across the country... END_OF_DOCUMENT_TOKEN_TO_BE_REPLACED

51st SCORE Baja 1000: 2018 Scott Bailey and Gustavo Vildosola did not have the... END_OF_DOCUMENT_TOKEN_TO_BE_REPLACED