You are here: Home / Uncategorized / First start in Baja 1000 will end Stronghold’s season 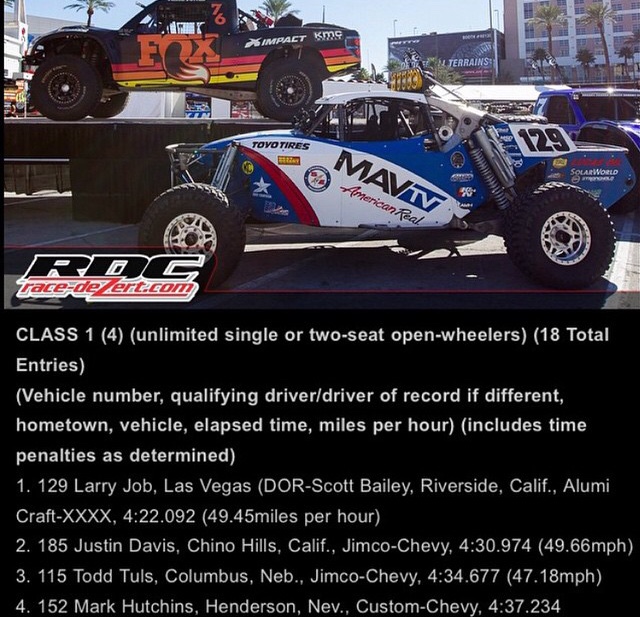 RIVERSIDE, California (November 12, 2014) – Stronghold Motorsports will close the 2014 off road racing season this week by making its first appearance in the legendary SCORE Baja 1000.

Scott Bailey, Brandon Bailey and Larry Job will divide the driving duties in the MAVTV/Toyo Tires/SolarWorld AlumiCraft Chevrolet Class 1 car for a desert marathon of approximately 1,275 miles down and across the Baja California peninsula from Ensenada in the north to La Paz in the south.

Job last week turned in the fastest lap in the class at a qualifying session in Las Vegas and Stronghold will be the first Class 1 car to take the green flag when the four-wheel entries get under way beginning at 12:30 p.m. on November 13th. (The motorcycle classes will get under way at 6:30 a.m.)

The Trophy-Trucks will be the first four-wheel class to start with the Class 1 entries next. The vehicles in those two classes will get the green flag in 60-second intervals and each entry will have 49 hours to finish the longest Baja 1000 in history.

As of November 10, there were 230 entries with drivers and co-drivers representing 33 states and Guam and 16 foreign countries, including Thailand, China and Egypt.

“We’ve been doing a lot of hard work in the shop and I think we’re ready to go,” Brandon Bailey said. Brandon, who drives the team’s Pro 4 truck in the Lucas Oil Off Road Racing Series, will be racing in Mexico for the first time. Scott Bailey competed in the NORRA Mexican 1000 in May and Job, the team’s Pro Buggy driver in short course events, is a veteran of desert racing in the U.S. and Baja California.

All three drivers took part in Stronghold’s four Best in the Desert races earlier this year.

“This will be my first actual race in Mexico,” Brandon said, “but we’ve been going down with the Herbst team for the past few years for pre-running so I kind of understand what we’re getting into. It’s going to be fun. It should be good.

“We want a podium (top three finish). That’s what we’re going there to do. I think with our strategy and the team we have that we can accomplish that. It’s not going to be easy, obviously. But I think we’ll do our homework and we’ll be sitting in the right position. We’ll have a good car. We definitely have good mechanics and good co-drivers.

It will be the final race of the year for Stronghold Motorsports.

As drivers make the climb to reach the premier classes of the Lucas Oil... END_OF_DOCUMENT_TOKEN_TO_BE_REPLACED

Due to the recent school closures caused by COVID-19, many children across the country... END_OF_DOCUMENT_TOKEN_TO_BE_REPLACED

51st SCORE Baja 1000: 2018 Scott Bailey and Gustavo Vildosola did not have the... END_OF_DOCUMENT_TOKEN_TO_BE_REPLACED